What's your design inspiration? My muse is often one of my favorite things...yummy, delicious foods! So when Spoonflower, the lovely print-on-demand fabric company, posted the weekly competition was about PIES I knew I was up for entering!

Just last fall I discovered a wonderful recipe on Kathy Patalsky's "Healthy. Happy. Life." blog (http://kblog.lunchboxbunch.com). It's her Vegan Caramel Apple Pie and it is delicious! I've made it several times, including her recipe for crust (which melts in your mouth!) My favorite way to make the apple pie is with about half the apples WITH peel on (getting those good nutrients) and about half peeled. The pie pictured here used some tart green apples and I hadn't made my caramel sauce yet. Check out Kathy's recipe here
http://kblog.lunchboxbunch.com/2011/01/vegan-caramel-apple-pie-recipe.html
and dig in to warm, sweet, cinnamon and ginger-infused soft apples in a flakey, buttery crust.

So when it came to creating a design for pies...well, I knew apple was my pie of choice and I get a big sense of satisfaction from making this pie from scratch. From rolling out the crust to peeling the apples, this process is a good activity to share with my kids and when it's done, it's just that much sweeter to eat!

Color my world with drinkblots art!

I'm enjoying my new "drinkblots" coasters at my desk today. These coasters absorb water and come in sets of 24 different designs. I love them! And I love that they are reusable and recyclable (AND made in the USA). I finally got some pictures of my new collections that are available. I'm fortunate to have two lines with Studio M, the maker of drinkblots (and part of the wonderful Magnet Works family). The first set is "Summer Garden" and is a collection of birds, butterflies, flowers, and patterns in blues, greens and purples. Fresh and cool. The second collection is "Nature Lover" with images from my modern lodge collection. Just the style for a fishing trip, the mountain vacation home, or just remembering the beauty and serenity of our forests and lakes. Have fun enjoying a different image with each coaster you use.

A toast to artful homes!
Posted by Robin at 12:15 PM No comments:

Happy 4th of July!! I got to sleep in today due to the holiday (yes!!!) and awoke to an excited email from my Mom about the Spoonflower weekly competition. Yay! I won first place and am so thrilled! Thank you, thank you to everyone who voted!! There were many entries of fantastic designs (around 480 entries I believe) and I feel very grateful and honored to be selected to be in the top ten and as the pick with the most votes. I'm blushing brighter than a ruby-red grapefruit...

I am really thrilled to have placed in the top ten designs for the Spoonflower Farmers Market design competition! My design came in second place and I feel so thankful to everyone who voted for it! Thank you!

Because of placing in the top ten my fabric will be produced for this next week in a fat quarter bundle of the farmers market winners. And my fabric will now be for sale individually as well! I am so excited and am ordering some to make a market bag. 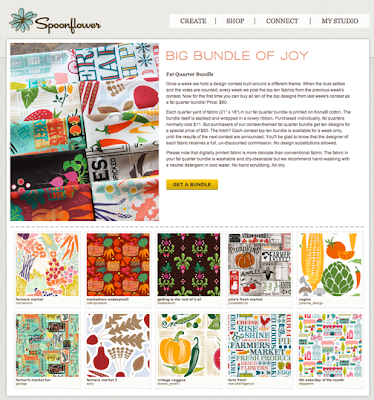 One big, lovely thing I am finding with Spoonflower is there is a really nice and supportive community of designers and fabric enthusiasts who communicate with you. When you work on your own you often feel you are working in a little vacuum and it is great to have connection with others who are creative.

So onwards to sewing and again, thank you! thank you! 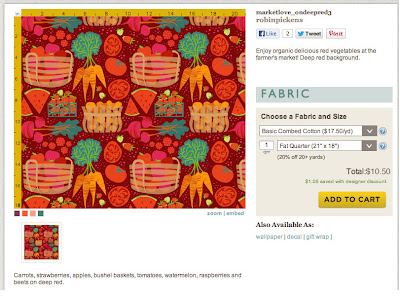 To the teachers who are just as gleeful to reach summer as the kids. Thank you for the times you spent the extra time, gave more encouragement, saw the spark and what is unique and great in our kids. Thanks to the teachers who see the individuality and effort and promise.

To the scout leaders, dance teachers, music teachers, tutors, band teachers, coaches and mentors who have added dimension, character, learning and community to our lives. You have enriched our kids with your special talents.

To the other moms and dads who chauffeured, hosted, taught, were there when we needed, understood what we were going through and were just good, supportive friends. We certainly don't do this alone. Thank you for understanding my sentimental, emotional heart.

Bittersweet and lovely... beginnings and endings...new roads ahead...

enjoy summer
Posted by Robin at 8:40 AM No comments:

Progress takes lots of experimentation and the courage to fail. And actual failing. That's a necessary step in the move towards the great stuff.

At least this is what I tell myself as I look at my banana bread.

Okay. So it didn't turn out anything like I had hoped. I saw this recipe online for a Paleo diet inspired banana bread and I was intrigued. I liked that the bread did not use sweeteners and regular flour. Coconut flour or almond flour instead. I'm trying to get away from using too much flour and sugar. And the pictures were lovely. Dense, perfect slices of warm banana bread goodness. I salivated. My bananas were ready as I attempted to veganize the recipe. Instead of 4 eggs I used half applesauce and half Bob's Red Mill Egg Replacer. Maybe that was my error? And they said instead of melted butter you could use Coconut oil. That could be it? Sigh. I don't really know. All I know is I looked in the oven when it was almost all baked and the loaf was high and golden and grand and I was feeling a little giddy.

Then 5 minutes later the timer went off and it looked something like this.

Oh. Well it still smelled good. When it cooled enough to try it my husband declared it tasted like nothing really, maybe a plantain. He made himself a smoothie for desert instead. I tried it and decided it was more like warm baked banana pudding. It was okay.
Of course that was once I drizzled it with honey and added soy vanilla ice cream on top. THEN it was okay, but go heavy on the honey. And heavy on the soy ice cream.

Progress, right?
Posted by Robin at 9:47 AM No comments:

Bryan would have loved brunch

It has been 2 years...exactly 2 years today...since our great friend Bryan died unexpectedly. It is Memorial Day today and the anniversary of his death and it feels like I can finally talk about it without crying. Typically we would have had him and Susan and the girls over for a holiday bbq and we would have swam in the pool and drank celebratory amounts of beer and wine. The grill would be going and he would have arrived with a cooler full of food and drink, probably brats and who knows what else. Bryan could make anything and everything funny and a rousing culinary event. The kids would be making lots of noise and the dogs would be barking as the kids jumped in the water and squirted them with mega-blaster squirt guns. General merriment would be the order of the day.

That was our regular routine. How fitting Bryan should exit this world, staking his memorial claim, on a weekend known for BBQs and relaxing with friends. We all know what Memorial Day is really- paying tribute in memorial to those who have served our country, those who have died to protect the very life we have here. For me, Memorial Day will always also be about remembering our dear friend. We miss him greatly. So in the very spirit of all that is Bryan, today we cook and enjoy each others company. And spend time with the kids. And splash in the pool. And drink mimosas. And eat good food!

We were lucky to have Susan here today with the kids. And I believe Bryan would have loved brunch. We had tacos inspired by Rick Bayless' Chorizo Potato taco recipe and fruit salad and bagels with cream cheese, lox and tomatoes. I started with Rick's recipe and veganized it and added some other touches. It was yummy! Also, Rick Bayless makes tomatillo and avocado salsa from scratch and I use a jar of organic tomatillo salsa from Sprouts. It's the lazy way but, hey, it's the holiday and the mimosa's and pool are calling...

Vegan Chorizo from Trader Joe's (fantastic! You would not know it is soy- tastes amazing)
2 large sweet onions
One package frozen hash browns (I use Trader Joe's 20oz. frozen bag)
flour tortillas
zucchini (how every many you like, I roast a tray of about 6 small-medium sized ones at a time)
garlic powder
Tomatillo salsa
Fresh cilantro, chopped
Avocado
Sour cream if desired (I use vegan sour cream- Follow Your Heart or Toffuti)

First I roast the zucchini. Cut them into quarters the long way then about 1/2 to 3/4 inch chunks. Mix with some olive oil. Spread on a pan, sprinkle on some garlic powder and sea salt if you like and roast at 400 degrees for about 12 minutes.

While the zucchini cook I start one pan with a little olive oil and slices of sweet onion. Saute the onion. As the onion browns and gets more dry, add a little water to help it cook and soften. I keep this onion separate as a topping for the tacos.

In another large skillet, brown the other onion which you've chopped/diced into small pieces. As the onion softens, add the soy chorizo (without the casing) and mix. Once heated, remove the chorizo and onion mixture and add a little more olive oil to the pan. Add the frozen hash browns and cook till they are browning and cooked through. Add the chorizo mixture back into the pan with the hash browns and mix together. This is your taco filling.

For tacos, let people layer in as they like. We make them with the potato/chorizo mixture on one side of the tortilla, add roasted zucchini, sauteed onions, tomatillo salsa, avocado and cilantro. Fold the tortilla over (like a hard shell taco looks). Add sour cream if you like.
Enjoy!!

Robin
Agoura Hills, California
Celebrating creating a life of color and inspiration through art and design. I'm a textile and surface designer who loves to draw, decorate and design collections for home decor, paper goods, textiles and giftware. I love a great meal, a good laugh and treasure my time with family and friends. 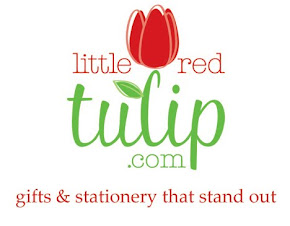 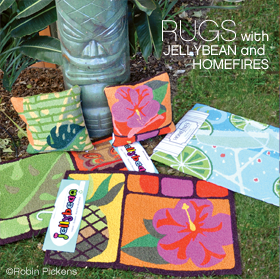 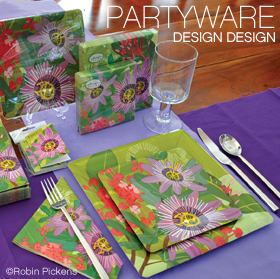 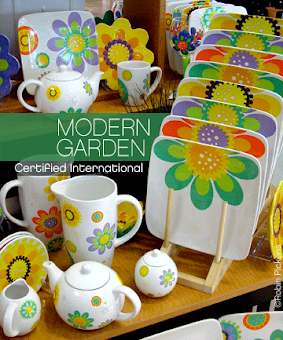